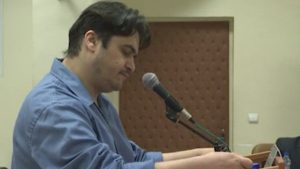 TEHRAN, Iran (NBC) – An Iranian journalist who was accused of sparking economic protests against the government was sentenced to death Tuesday.

A judiciary spokesman announced Zam’s death sentence saying he had been convicted of “corruption on earth” which is a phrase used for alleged anti-government activities.

The protests in 2017 were the biggest challenge to Iran’s government since the mass unrest of 2009.

Zam lived in Paris and it’s unclear when or how he returned to Iran.

Iranian TV has broadcast Zam confessing a number of times to trying to overthrow the government.

Zam will be able to appeal his death sentence.