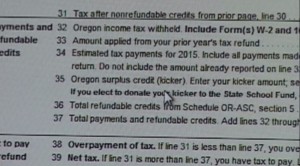 A half dozen people are facing charges in connection with the fraud. But officials with the IRS say identity theft isn’t the only avenue criminals are taking, convincing phone scams are happening every day.

“We’re going to send you a letter, or we’re going to visit you directly in your home or your place of business.”
Thompson says the best thing to do if you receive one of these calls is hang up. For more tips click HERE.