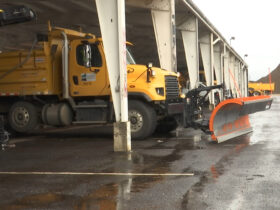 Around noon Thursday, the floodwaters washed out a large portion of Highway 47 near the Mist Junction, located between Clatskanie and Vernonia.

Shortly before it happened, neighbors heard water rushing down the road. Marvin, a 52-year-resident of the area, told KGW he knew something was wrong.

He went outside to check the road and found the asphalt cracking and the culvert undermining. He and another neighbor began warning passing drivers to turn around.

“We were talking about the kids at the school walking across the road that was there so they could get home,” said Marvin. “And about 10 seconds later, that answered that question. [The highway] thumped and we scattered! It was a big thump — all that pavement hitting the ground.”

Crews secured the area, which was just one of multiple spots in the coast range damaged by the floodwaters.

Just south of Seaside, the Oregon Department of Transportation closed a stretch of Highway 101 to cars because of flooding. Nearby Beerman Creek jumped its banks and on the Nehalem bridge, a strong gust of wind knocked a semi-truck onto its side.

“It’s more extreme than what we’ve seen in the past,” said Ted McLean, public works director for Clatsop County.

McLean said he hadn’t seen such harsh conditions in about 15 years. He asked that people in the area to stay home and off the roads if possible, especially around high water.

“They could be swept with the water, swept off the road,” said McLean. “They could lose their life in some of these situations.”

The Seaside School District canceled all classes and activities for Friday because of unsafe road conditions.

Clatsop County is expecting high tide around 5 a.m. Friday morning which could bring more trouble. McLean said crews would be out monitoring bridges for debris and keeping the roads clear.