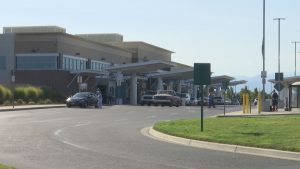 MEDFORD, Ore. — A flight from Seattle to Medford last week may have exposed people to coronavirus, that’s according to Humboldt County Public Health in Northern California.

NBC5 News received the information last night, however, when we contacted Jackson County Public Health, it wasn’t aware of the flight’s potential risk and was reaching out to state health officials.

The flight in question was Delta flight 41-24 from Seattle to Medford on March 18th, last Wednesday.

Jackson County Public Health’s Dr. Jim Shames says normally the county would get this kind of information from the Centers for Disease Control and Prevention or the Oregon Health Authority. Those agencies would then tell them who specifically is at risk or was sitting on the plane.

Presently, Dr. Shames says they don’t have that information.

As a result, Jackson County Public Health is warning anyone who was on Delta flight 41-24 to assume they may have been exposed and take proper precautions by quarantining at home.

“You should self-quarantine for 14 days at home. If you develop symptoms compatible with the disease… fever, cough, shortness of breathe, malaise, headache… you should call your health care provider for advice,” said Dr. Shames.

Dr. Shames says he believes this kind of exposure will become increasingly more common as long as people continue to not stay at home.

Jackson County Public Health says it’s continuing to investigate the situation and is working to get flight information from the OHA to contact people who may have been exposed.