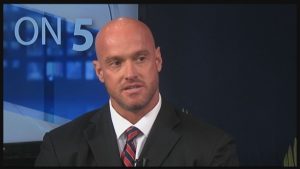 JACKSON CO., Ore.– According to an estimate sent from Plant Oregon, an excavation company in talent, Jackson County is set to spend nearly $500,000 to repair areas along the bear creek greenway, but it’s not as simple as that.

Jackson County Administrator Danny Jordan sent a letter to Congressman Walden and his staff, saying that emergency erosion control measures need to be taken in the next few weeks.

In the letter, he said FEMA is being “non-committal”.

He said the agency is saying the $500,000 may or may not be reimbursable.
County Commissioner Colleen Roberts said the issue is not one to take lightly.

She said, “There is some hazardous household materials, or heavy metals, or asbestos. How that gets removed safely is a pretty significant concern of the county.”

Jordan, in his letter, said the “monster on the greenway” covers 9 miles and 900 acres of needed attention.

The county said this decision will take up a major portion of it’s weekly meeting tomorrow morning.