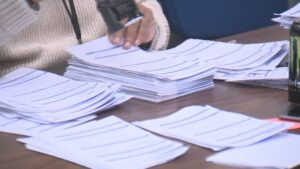 That’s the latest from the Jackson County Elections Office.

Jackson County Clerk Chris Walker says she expects the number to go up slightly until the election is certified at the end of the month.

“You can bring a person to the water, but you can’t make them drink it. We have made it so easy to vote in Oregon. We allow for easy access of the ballot. They just have to choose to cast that ballot and participate in the election,” said Chris Walker, Jackson Co. clerk.