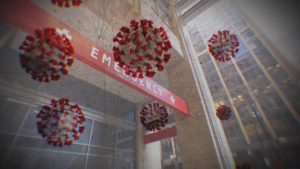 JACKSON CO., Ore. — Health officials say Jackson County actually could have qualified for ‘moderate’ risk level in one of the state’s metrics. Others though, finally allowed the county to get into ‘high.’

While many people in the community are excited to dine inside again, county and state health officials are warning people to do so carefully, so the county doesn’t go back to extreme again. “As we start going back into gyms and theaters and restaurants, we need to do so cautiously,” said medical director Dr. Jim Shames.

Jackson County is dropping from Governor Kate Brown’s “extreme risk” category to ‘high risk’ on Friday, but health officials say if people aren’t careful, the county could go back to ‘extreme’ in just two weeks.

“I would say it is possible we could bounce back up again when you look at we’re right on the cusp of one or the other,” said Dr. Shames. Jonathan Modie with the Oregon Health Authority said Jackson County was right on the edge when the risk level changed.

Jackson county’s test positivity rate actually qualifies in the last report for the ‘moderate’ risk level. However, the county’s cases per 100-thousand has kept it in ‘high.’ “To see the graph of cases go way down, if you step back and look at it we still have way more cases than we had 3 to 4 months ago,” said Dr. Shames.

Modie says COVID-19 cases are expected to surge nationwide due to the spread of more transmissible variants. “We’re trying to stay ahead of the variants, by getting people vaccinated,” said Dr. Shames. While Dr. Shames says it appears the county is on the right track, he knows several variables come in to play while trying to stay in one risk level or another.

“I would not like to see us briefly go into a lower category and then go back up. If that’s what we need to do, then that’s what we will do but I know that will be very difficult,” said Dr. Shames. Both Dr. Shames and Modie say the best thing to do for public health and for businesses, is to continue wearing a mask and lower the spread.

Dr. Shames shared his excitement over the newly approved Johnson and Johnson vaccine. He says in a month or two the county should have enough supplies to vaccinate anyone who wants one.