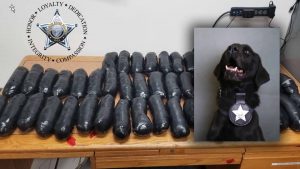 According to Oregon State Police, a trooper in Central Point pulled over a pickup truck for speeding on Interstate 5. The trooper asked to search the vehicle and was granted permission by the driver. The trooper then brought out his drug-detection dog, K-9 Jaxson.

OSP said Jaxson smelled a controlled substance, and a further search of the vehicle revealed 56 pounds of meth hidden inside a spare tire.

The driver of the vehicle, 26-year-old Esteban Villa of Anaheim, California, was arrested for unlawful delivery and possession of meth.