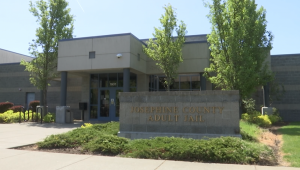 JOSEPHINE CO., Ore. — The death of George Floyd and calls to reform in policing have sparked a national conversation about defunding law enforcement in major cities across the country.

Although many say the concept sounds radical, council members in Minneapolis have already voted to disband its police department and create a new system of public safety.

In other major cities like Los Angeles, Mayor Eric Garcetti is redirecting millions of dollars from its police department into other city programs.

Calls for defunding police can mean different things depending on who you ask but, in general, it’s diverting funds from law enforcement into other programs, such as social work or health initiatives.

In southern Oregon, Josephine County has struggled to fund its sheriff’s office and jail for over 30 years.

Although its situation doesn’t replicate what current calls for ‘defunding’ police could look like, nearly 40 inmates were released from the Josephine County Jail in 2012.

Their alleged crimes range from rape and menacing to assault.

It was a moment in history some county leaders hope never repeats itself, caused by a lack of funding and budget cuts going on for 30 plus years.

Commissioner Morgan was a parole officer at the time.

She says patrols dropped to 8 hours a day and the sheriff’s office was severely understaffed.

“The city police and state police have been the major crimes team for extreme crimes that happened in the county… it has been defined before as the wild west,” she said.

Today, the county is operating with a higher capacity jail and a growing sheriff’s department after federal agencies renewed secure rural schools funding and voters passed a new public safety levy in 2017.

The levy funded the jail and juvenile detention, so county commissioners were able to use general funds for patrol and other programs.

NBC5 News spoke with the sheriff’s office about the changes back in January.

“Quite a few number of even criminals have made the comment of I didn’t realize you guys were out here at night and those are the things we take pride in,” said Undersheriff Travis Snyder, Josephine Co. Sheriff’s Office.

Undersheriff Snyder says patrols are now up to 20 hours and that’s leading to more arrests.

He says it’s about making the community feel safe again.

“If you’re not handling calls… show a presence, let the community know we’re out there,” he said.

And that’s exactly what Commissioner Morgan say has happened.

“There’s a belief that somebody will respond, there’s been a discouragement of crime in certain areas and there’s an increasing trust in our sheriff’s office because of the patrols and the responses going on,” she said.

However, she says that doesn’t mean crime has gone up, it’s that there’s now more deputies taking action when crimes do occur.