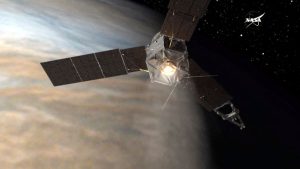 (NBC News) — For the first time in two decades, the United States has a spacecraft orbiting Jupiter.

It took five years, but the Juno probe slipped into orbit around the solar system’s largest planet late last night.

After a journey of nearly 2 billion miles at a cost of $1.1 billion, it all came down to a crucial 35-minute decent.

During the five year journey, it traveled faster than anything ever in the universe at one point: 165-thousand miles an hour.

“After a 1.7 billion mile journey, we hit our burn targets within one second on a target that was just tens of kilometers large. Isn’t that incredible?!” Rick Nybakken, NASA Systems Engineer says.

With its solar panels unfolded, Juno is the size of a basketball court.

It will spend nearly two years orbiting Jupiter, flying through gaseous clouds, measuring gravity and magnetic fields, and measuring how much water and ammonia are in the planet’s atmosphere.

“That’s what we’re kind of trying to answer here. How did Jupiter get to be Jupiter? How did the solar system get to be the solar system? Where does all this stuff, this amazing universe we see, how does it work and how did we begin?” Steve Levin, NASA Project Scientist says.

NASA says it expects to start getting data to analyze from Juno in late August, near the end of its first Jupiter orbit.

Its success sets the stage for further exploration of the universe with other solar power probes in the future.