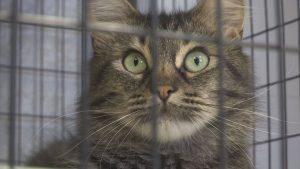 But for our furry friends, it can be a rough night.

Medford’s SoHumane says the noises and vibrations from fireworks can be very disruptive for our pets.

It says the day after Fourth of July and New Years is always busy for animal control with multiple calls about pets missing or found.

To ensure your pet’s safety and comfort, keep them indoors, if possible.

An enclosed space reduces the risk of animals getting out.

“It’s not uncommon for dogs in a state of panic, that wouldn’t normally necessarily try to escape their yard or go over an under fencing, for them to dig out or jump or climb over the fencing,” said Ryan Johnson, operations manager at SoHumane.

Johnson says to turn on a tv and play music louder than usual to muffle out sounds outside.

As an extra precaution, he says to update your pet’s ID’s and microchips.

That’s so animal shelters can reunite you and your pet as quickly as possible.