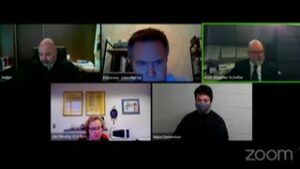 Kyle Rittenhouse appeared in an Illinois court Friday morning for a brief hearing. Rittenhouse was wearing a blue mask as he appeared via Zoom from the detention facility where he is being held.

Assistant State’s Attorney Stephen Scheller requested the hearing date be set for as soon as possible.

Rittenhouse attorney John Pierce responded by calling the case “political prosecution” and saying “there is no reason to rush.”

Pierce also said Rittenhouse would be in danger if he was moved to Wisconsin.

The judge set a date of October 30th for the extradition hearing.