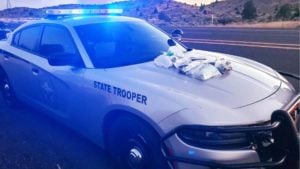 KLAMATH FALLS, Ore. – Two people were arrested after police found them with over 10 pounds of heroin and fentanyl just south of Klamath Falls.

Oregon State Police said on the evening of July 25, a trooper saw a Ford Escape speeding and swerving on Highway 97. The trooper pulled over the vehicle near milepost 278 and was given permission to search it. OSP said 11.2 pounds of heroin and 2 pounds of fentanyl was found hidden inside the vehicle.