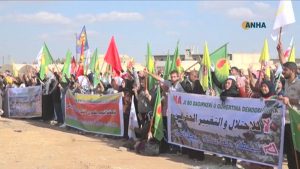 RAS Al-AYN, Syria – Protesters in the northern Syrian town of Ras al-Ayn demonstrated Tuesday against U.S. troops pulling out from positions along the border with Turkey ahead of an expected Turkish invasion. The vast majority of those who took part were Kurds.

Turkey’s president has threatened for months to launch a military operation across the border.

A local official in northeastern Syria called on supporters to head to the border, ahead of a possible invasion.

Protesters expressed concern the U.S. was essentially abandoning Kurdish fighters who fought alongside American forces in the years-long battle to defeat ISIS.

The Kurdish-led fighters have been the main U.S.-backed force in Syria in the fight against ISIS.

In March, the group captured the last sliver of land held by the extremists, marking the end of the so-called caliphate that was declared by ISIS leader Abu Bakr al-Baghdadi in 2014.