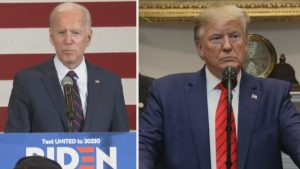 WASHINGTON, D.C. (NBC) — The Labor Day holiday is no holiday from the race for the White House.

On a day honoring America’s workers, President Trump is fighting to keep his own job, touting the economy and defending himself against questions about a magazine report that he called U.S. service members “losers” and “suckers.”

Surrounded by military veterans and union leaders, Joe Biden appeared in Pennsylvania, criticizing the president’s alleged comments and handling of the pandemic. “He just sort of waved the white flag on dealing with COVID, and he only wants to do is just reopen,” Biden said. “But the ways reopen is causing us to, you know, shut down look what’s happening with schools right now.”

President Trump accused Biden and running mate Kamala Karris of “anti-vaccine rhetoric.” The former vice president said the president is dangerously wielding the possibility of a vaccine as a political tool. “If I could get a vaccine tomorrow, I’d do it,” Biden said. “If it cost me the election, I’d do it. We need a vaccine now.”

Both campaigns are laboring for an advantage with just 57 days until election day.

In a campaign filled with surprises, there’s a scheduled development Tuesday. Former Trump attorney Michael Cohen’s book will be released, in which he’ll accuse the president of colluding with Russia.

The White House calls Cohen a liar and his book “fan fiction.”