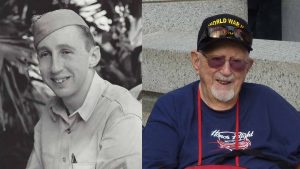 LaGRANDE, Ore. – The last original member of the Oregon Air National Guard died over the weekend.

The 123rd Observation Squadron would eventually become the 123rd Fighter Squadron based out of Portland.

The Oregon Military Department said during World War II, Parish was deployed to the China-Burma-India Theater as a medic.

Parish remained in the military until 1945, leaving with the rank of Technical Sergeant.

Parish would have celebrated his 99th birthday this summer.