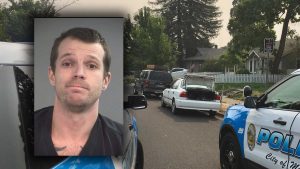 The Medford Police Department said an officer saw a stolen Honda Civic in west Medford. It was reportedly stolen from a driveway on August 15.

The officer pulled the vehicle over on West 2nd Street and arrested the driver, identified by MPD as 28-year-old Kacey Allen Smith. He received additional charges of failing to register as a sex offender and driving while suspended.

“Stolen cars are a constant problem in our city,” MPD wrote. “Please make sure you take measures to secure your car and car keys. If you own an early model Honda, watch out! They are stolen the most because thieves have figured out how to start them without a key or with a shaved key.”