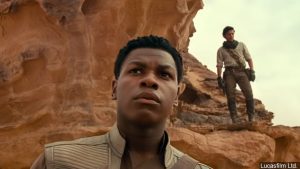 LONDON, U.K. – The script of the final Star Wars installment was nearly sold on eBay, potentially spoiling the finale for devoted fans.

The script for the highly anticipated new Star Wars movie, The Rise of Skywalker, was shockingly seen for sale on eBay. The culprit for the leak was revealed Wednesday to be stormtrooper-turned-resistance fighter John Boyega.

The British actor promised it was an accident. He said he left his script under his bed. And, according to him, a cleaner came in and put it up for sale for just $84.

Scripts for star wars movies are among the most closely guarded in the world. But thankfully there’ll be no spoilers for eager fans. A Disney employee found the script online and was able to get it back before it was sold.

The Rise of Skywalker starts its worldwide roll-out December 18th.