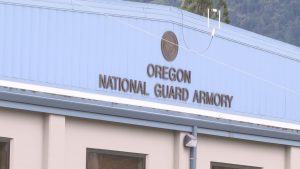 Ashland, Ore.– Armories across the country, including Oregon, are temporarily banned from holding public events. According to the National Guard, those armories may have high levels of lead in the air.

The closure order doesn’t affect the Ashland armory on East Main St. because it was closed to public events in May, 2015 after issues with lead were discovered. It, like the other impacted armories, once had indoor shooting ranges.

Ashland’s indoor shooting range has since been sealed and work is in process to fix the problem.

“We have to get a licensed, bonded contractor to ensure we meet all of their criteria,” said Maj. Stephen Bomar, Director of Public Affairs for the Oregon Military Department. “It might take up to a year, possibly a year and a half.”

The order to close armories to the public does not impact the historic Ashland armory on Oak Street, which is now an event venue. It’s been tested and cleared and all scheduled events there are happening as planned.

The Medford armory isn’t impacted by the order, either. It’s currently undergoing renovations.