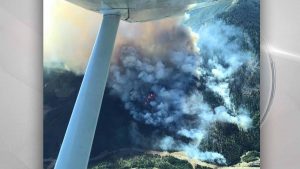 An aerial view of the Milepost 97 Fire on July 25, 2019, courtesy of the Douglas Forest Protection Association.

CANYONVILLE, Ore. – The Douglas County Sheriff’s Office is telling some residents near the Milepost 97 Fire that they need to be ready to evacuate.

At 3:19 p.m. on July 25, the sheriff’s office released the following warning: “In conjunction with the Douglas Forest Protective Association the Sheriff’s Office has issued a Level 1 ‘Be Ready’ evacuation notice for the MP 97 Fire outside of Canyonville for residents living in the 100-300 block of Ritchie Road.”

Deputies explained the Level 1 evacuation warning means affected residents should be ready to evacuate, have a “go kit” ready, have an evacuation plan, be fire-aware, and create a defensible space around any vulnerable structures.

The Douglas Forest Protective Association said the Milepost 97 Fire was first reported at about 10:00 p.m. on July 24 along Interstate 5 near Canyonville. It has since grown to an estimated 80 acres in an area where firefighters are dealing with falling trees, rolling rocks, and wind.

According to the results of a preliminary investigation, the fire is believed to be related to an illegal campfire.

The fire remains highly visible from I-5. Drivers are encouraged to slow down and turn on headlights when traveling through the area. Drivers are also being told to not pull over on the interstate and refrain from using cell phones to take pictures or videos while driving.