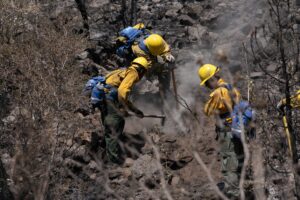 BONANZA, Ore. – Crews were able to hold the lines overnight around a wildfire burning in Klamath County.

The Oregon Department of Forestry said the Cutoff Fire was first reported on the afternoon of Saturday, June 19 about six miles north of Bonanza. Since then, it’s grown to 1,150 acres in size.

Sunday night, crews were reportedly kept busy suppressing numerous small fires started by drifting embers. Monday morning, over half of the fire’s perimeter was lined and it was 10% contained.

Overnight, high winds kept firefighters busy on the western flanks of the Cutoff Fire as crews battled spot fires on dry fuels. They were able to keep the fire within designated firelines. It remains at 1,150 acres in size and is now 12% contained.

125 structures in the area are still threatened. It has not yet been determined how many structures were damaged or destroyed.

As of Tuesday morning, a Level 2 (GET SET) evacuation remains in effect for the area east of Bly Mountain Cutoff Road, between Jaguar Lane/Raccoon Lane and Spaniel Lane/Crocodile Lane, west of Thrasher Drive. A Level 1 (GET READY) evacuation notice is in place for other areas around the fire.

341 people continue to work on the fire.

For the latest updates, visit https://www.facebook.com/CutoffFire2021