CENTRAL POINT, Ore — On the opening day of the Jackson County Fair, 17-year-old Haley Willison continued her bull-riding career during the challenge of champions.

“I think it’s fun to be the only girl back here. ” Willison told NBC 5 Wednesday.

Willison has been bull riding for the last five years. She received two buckles for finishing first at events in California. One of those events was the National Bullriding Championships held in Chico in 2019. 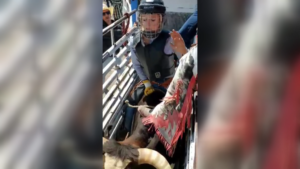 The teenager moved up to the junior bulls section this year before receiving the invite to the event.

“I think it’s so much fun. I like the adrenaline rush and it gets me excited,” Willison said. “I just wanted to do rodeo but I didn’t have a horse or anything so I decided that bulls were gonna be my next thing.”

Willison says her goal is for more girls to join bull riding. She believes anyone can do it as long as they stay strong mentally.

“You got to be tough but anybody can do it,” Willison said. “You just got to work hard at it. It’s all in your mind.”

Her next event will be later in the month in California.