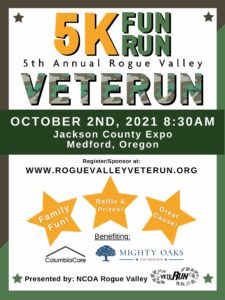 CENTRAL POINT, Ore.- The 5th annual Veterun is coming up, and organizers are looking for more runners to sign up.

The Veterun is a 5K fun run and fundraiser. The run supports local and national organizations that provide health and mental wellness programs for veterans.

It’s organized by the Rogue Chapter of Non Commissioned Officers Association, which is chaired by Terry Haines. He says the event has a chance to bounce back after going virtual last year due to Covid-19.

The run starts at 8:30 A.M. on October 2nd at the Jackson County Expo.  You can sign up at RogueValleyVeterun.org.