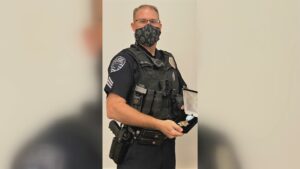 ROSEBURG, Org — A Roseburg police sergeant was awarded the medal of honor after responding to a shooting in February.

Sgt. Doug Walton was off duty on February 22nd; when he saw an active shooting at the budget 16 motel in Roseburg.

He saw the shooter, Devin McNamara, flee the scene and return with two rifles – aiming at passing cars.

After failing to steal a car, Mcnamara was tackled by Sgt. Walton and physically restrained.

An investigation revealed that two bystanders were seriously injured and a third died from gunshot wounds.