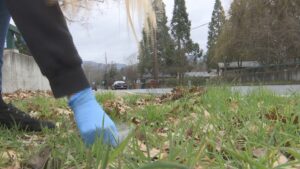 GRANTS PASS, Ore. — About two dozen volunteers made up of adults and children spent their morning cleaning up roads in Grants Pass.

The Parent-Teacher-Student Association, or P.T.S.A, signed up for the “Adopt-A-Street” program through the city.

The group met at South Middle School to pick up trash on Harbeck Road.

One of the school district’s missions is to teach students  how to be responsible, productive citizens.

“It’s just kind of weird for a middle school to have their parent help out in a classroom in that stage of life, so we’ve been really working at ways for families to do something together and what better way to give back to the community by going out and picking trash up,” Principal, Barret Sale, said.

The city asks for a commitment of two years for the road adoption program, it has three or four events each year.

Principal Sale said the school is aiming to have an event every month.