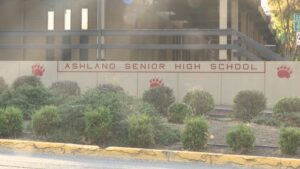 ASHLAND, Ore. — Ashland High School is welcoming students back to campus for in-person learning after temporarily closing for 2 weeks.

The Ashland School District says it closed the school campus due to severe staffing shortages, adding that across the district, around 87 staff members (about 25%) were absent.

District Superintendent Samuel Bogdanove says 20 staff members were absent this morning, but their shifts were able to be filled by substitutes.

“The absences between both staff and students are on a steady decline, and that’s incredibly encouraging. We were able to keep the other schools open aside from the high school for 2 weeks and it’s absolutely fantastic to see the kids out there on the quad again,” said Superintendent Bogdanove.

He says they’re monitoring the situation and hope to bring spectators back soon.