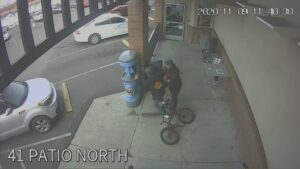 ASHLAND, Ore. — The Ashland Police Department is asking the public for help identifying a woman they say assaulted a young boy.

The incident took place at Market of Choice around noon Monday.

Surveillance video released by police appears to show the woman pushing the boy down to the ground, before an employee steps in.

Ashland Police Chief Tighe O’Meara says the woman assaulted the boy after he stood up to her for his little brother.

“We all saw the video, there is no excuse for an adult going after a child like that,” Chief O’Meara said.