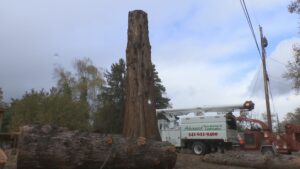 MEDFORD, ORE. —This wet and windy storm is actually creating business, for some local companies.

At a home near downtown Medford, the crews removed a large tree that posed a threat.

The company says the 100 foot tall, giant sequoia, was rotting at the base, meaning it could be dangerous.

The task took 4 hours for the 8 people on the crew.

The company anticipates with this storm, it’ll be a busy weekend with a lot of calls.

According to Advanced Tree member, Will Danielson, “Anytime in the Winter time is not a great time, because a lot of things happen you know, we get a lot of rain. The most we’ve had is about 40 so those are the days we really like.”

If you have any trees that could pose a risk, many local companies do free assessments.