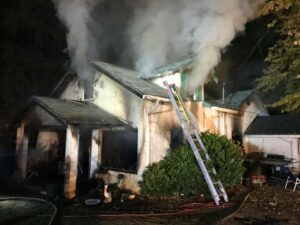 PHOENIX, Or.- Thursday evening, firefighters responded to a house fire in Phoenix on Fern Valley Road. Now, officials are not only investigating the cause of the fire but also a body that was found at the scene.

Around 6:40p.m. last night, Medford Fire responded to a structural fire in Phoenix. After putting out the fire, responders found a body inside the burnt home.

Despite the fire being in Phoenix, Medford Fire responded alongside some crews from Fire District Five. Fire fighters were on scene less than ten minutes after they got the call.

Though the blaze did not spread to any nearby buildings or vegetation, the fire took about twenty minutes to fully extinguish. The severity of the fire forced responders to create holes in the roof of the one-story home in order to get to the base of the flames.

Medford Fire says the only person in the house at the time of the fire was the individual who died.

Samantha Metheny, the lead investigator for the fire, told NBC5 News the investigation into the cause of the fire and the death is on pause as the medical examiner has yet to perform an autopsy.  She says the results of the autopsy will help inform what caused the fire.

According to Jackson County public records, the property is owned by Cecil D. Cunningham, who died in January of 2017.