SALEM, Ore — As the November general election nears, voters will have the opportunity to weigh in four key measures aimed at the state constitution and holding legislators accountable.

Measure 111 would amend the Oregon Constitution, to add that the state ensures every resident has access to affordable health care – similar to k-12 education. 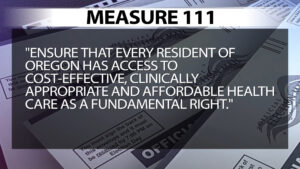 “Watching relatives and friends struggle with the cost…We need to do something in terms of affordable health care,” said Frederick

On the other hand, Medford republican state representative Kim Wallan argues that the measure will have legal challenges if passed.

Additionally, she notes that the impact will be different for each community.

“What [the measure] means exactly is very confusing and very undefined,” Wallan said. “I think its going to be right for litigation and potentially right for huge income tax increases.”

Measure 112, would remove language from the Oregon Constitution that allows slavery or involuntary servitude as criminal punishment.

Frederick said the bill is something that’s continuing to be looked at on the national level. 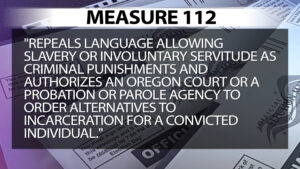 “This was done and used in the Jim Crow south and across the country,” Frederick said. “So basically as an excuse to hold on to and to stop people from once again being full citizens.”

Measure 113, intends to disqualify state legislators from seeking re-election, if they have ten unexcused absences from any one legislative session.

The move stems from recent years, where republican representatives walked out of Salem to delay the passing of bills by democrats with a super majority.

Democrats in the other states have also done the same thing.

Wallan said she believes the measure is not the best way to fix the perceived problem. 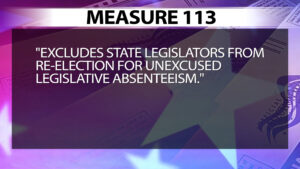 “In Oregon we require, two-thirds to be present for quorum,” Wallan said. “So if people don’t like the requirements, they can change the quorum requirements. But this leaves it vague.”

However, Frederick thinks something needs to be done to keep legislators on the job.

“They decided that the only thing they’re going to do, is a strategy to stop things, rather than work and get something done for the people of Oregon.” said Frederick.

Measure 114 is the most controversial of the four, which keys in on gun laws. That story can be found here

To find out more about statewide measures and bills considered in your area, you can view the pamphlet on the secretary of state’s website.