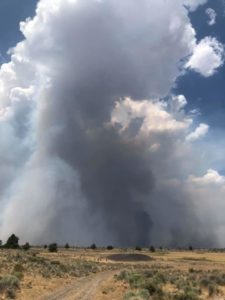 SISKIYOU COUNTY, Ca. — One of the largest fires burning in our region, the Caldwell Fire, has blackened more than 104 square miles.

The fire was sparked by lightning last Wednesday. It is now almost 64,000 acres.
There is a mandatory evacuation for Tionesta.

“We’re doing everything we can to turn the switch off on this fire, but it is having behavior that we’ve not seen here in the lava beds,” said Whalon.

The Caldwell Fire is the largest of several fires in the ‘July complex’.
Evacuation orders are in place for some homes south of Tulelake and the Medicine Lake area.

The fire is 0% contained.