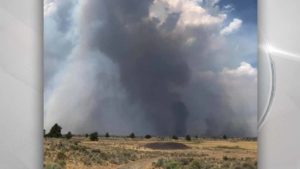 MODOC COUNTY, Calif. – A wildfire burning in Northern California has grown to over 67,000 acres.

The fire threatens the community of Tionesta, which was placed under a mandatory evacuation order along with the nearby Lava Beds National Monument.

Monday morning’s weather patterns prompted explosive growth of the fire, but rain in the evening helped firefighters. On Tuesday, crews will continue to attack the north side of the fire as it pushes against the shores of nearby marshes.

The July Complex fires are 30% contained.