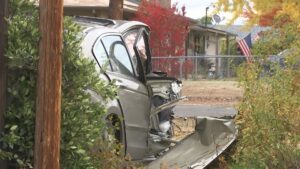 The crash happened around 1 p.m. on Hazel Street and N. 6th Street.

Police say 6 juveniles were in one of the cars involved in the crash. They say a 15-year-old girl was treated for critical injuries.

Neighbors in the area didn’t want to talk on-camera, but say speeding on Hazel Street is a common issue in their neighborhood.

Police have no other information at this time.

Stay with NBC5 News for more information on this developing story.