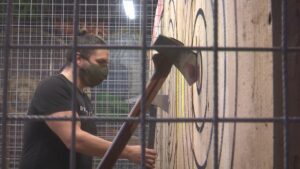 The tournament hosts people from around the world to compete throwing hatchets and axes.

The co-owner, Kyle Durrant, says around 60 people showed up to throw their axes with hopes of winning cash and other prizes.

He says the throwers came as far as Philadelphia, Texas, and Canada to compete.

“This is a huge deal, we’re really honored the WATL chose us to have this tournament, it’s the first of the year for the new season so we’re really excited to be the first one for everyone to gather,” said Durrant.

He says the tournament circuit is similar to a bowling circuit.

Durrant says by the end of the year, ax-throwers who collect enough circuit points and do well can be invited to the world axe throwing championships.