GRANTS PASS, Ore — A six acre fire that prompted multiple agencies across the Rogue Valley last Saturday, was determined to be caused by a bad catalytic converter.

The six acre fire briefly shut down Highway 199 last Saturday. Days later, Oregon Department of Forestry says it found pieces of a catalytic converter on the side of the road.

“When they’re coming out of the car like that in pieces, they’re really hot at 1,700 degrees to about 2,200 degrees.” said Natalie Weber, public information officer with the Oregon Department of Forestry. 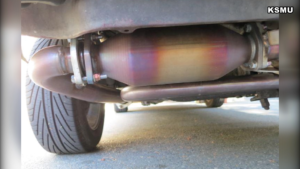 RELATED: Redwood Highway back open and evacuations lifted for fire near Selma

Greg Unger with Kellys Automotive in Medford, says most catalytic converters are located on or near the exhaust manifolds. The first sign that they are going bad is when there’s a misfire.

He says when the light comes on for the catalytic converter, it’s a sign that there’s a problem.

“Get the spark plugs changed at the time they’re supposed to be changed,” Unger said. “That way you’re not working that catalytic converter harder than it needs to be.”

Drivers could be found liable for the cost of putting out a fire caused by their cars.

“If you see your engine light come on or you hear rattling noise, have it looked at to see what’s going on,” Weber said. “Regular maintenance is going to take care of any of those problems than can start a fire.”

The car that the converter belonged to is unlikely to be identified according to ODF. However the Department asks that you contact them if you have any information.