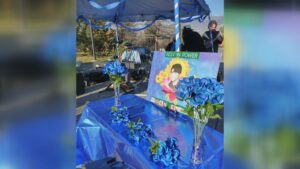 ASHLAND, Ore. — A drive-in celebration of life was held earlier today for Aidan Ellison, the young black man shot and killed in Ashland just before Thanksgiving.

The event, called Turn up the Volume, was hosted by SoEquity or Southern Oregon Coalition for Racial Equity.

On Tuesday, Aidan Ellison’s mother, Andrea Wofford announced she’s filing lawsuits against the man who killed her son, as well as the Stratford Inn, where it happened.

Her attorney says the inn shouldn’t have allowed the suspected murderer, Robert Keegan, to stay there while carrying a weapon.

Wolfard and her attorney say Keegan also has a history of abuse and wasn’t allowed to legally own a weapon.

They say the Stratford Inn should have never allowed Keegan to stay there while illegally carrying a firearm.

Ashland Police have said there’s no evidence that it was a bias crime, but it is something they are investigating along with the F.B.I.

Keegan is charged with murder, manslaughter, reckless endangering and unlawful use of a weapon.

He’s being held in Jackson County Jail without bail.