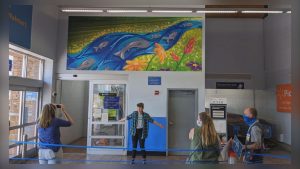 MEDFORD, Ore. — A Central Point girl is the creator of a new Rogue Valley mural.

9th grader Sophie Quackenbush, who goes to Crater Renaissance Academy, won a competition to design a mural for the south Medford Walmart.

Quackenbush said her art teacher told her about the competition the day before entries were due.

After the initial shock of winning the competition, Quackenbush went to see the finished mural this week and says it was a surreal experience.

“It was a really cool feeling just seeing it up there and I never really thought I’d have my art that public,” she said.

Quackenbush says she wanted to create something that captured the beauty of the southern Oregon landscape.

The mural shows the Rogue River with salmon, Table Rock, and wildflowers.