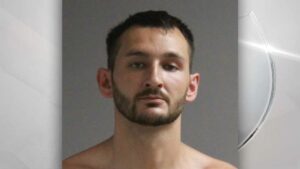 PROSPECT, Ore. – A local man who failed to appear before a judge nearly 90 times is now behind bars.

Among Dineen’s charges are looting during the South Obenchain Fire and a failed theft attempt at a hemp facility.

Dineen was wanted on 12 warrants including multiple drug charges when a task forced tracked him to a house in the 2000 block of Mill Creek Road in Prospect. There, he was found hiding in an upstairs bedroom and was arrested without incident this past Wednesday.

Dineen remains behind bars in the Jackson County Jail with bail set at more than a half-million dollars.