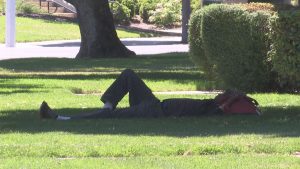 MEDFORD, Ore. —Medford’s city manager recently presented a current outlook on the homeless situation to a local Rotary Club Wednesday. He talked about the number of people with mental health and substance abuse disorders, along with the lack of treatment facilities.

Brian Sjothun said the biggest challenge is getting people into those facilities. He said many don’t want to accept the help.

The city is reportedly taking steps to address the situation.

“We are getting set to open up the Navigation Center next week in partnership with Rogue Retreat, Kelly Shelter will be relocated to that area, we are also working with access and other non-profits on the front half of those operations,” said Sjothun.

He added that a new urban campground on west McAndrews Road could also be up and running by the end of next June.