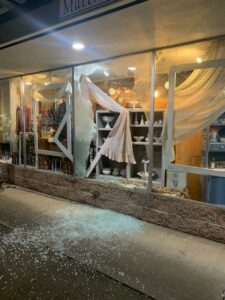 The U.S Geological Survey reported an earthquake about 125 miles west of Bandon. It happened just after 11 p.m. Monday.

When the owner of Marshfield Mercantile’s came into work in the morning he found a window shattered. Surveillance video caught when it broke during the quake.

“The window is temporarily fixed, you can see it’s boarded up behind me here. A contractor friend of mine sent his crew down right away to board it up. Then the glass company came here to measure and will replace the glass,” said Steve Schneiderman, the owner.

The quake happened about 6 miles underground. There’s been at least one aftershock. It did not prompt any tsunami warnings or watches.