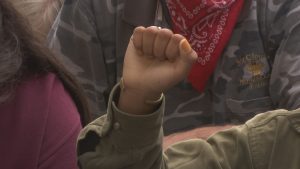 Demonstrators marched to the Siskiyou County Courthouse around 6 p.m. where they had eight minutes and 45 seconds of silence. They walked back to the park and had speeches and an open mic for anyone who wanted to share something.

“We need to figure out a way to build our communities rather than destroy them,” said demonstration attendee John, who didn’t want to give his full name. “In a positive way, like having some of these positive protests.”

The demonstration was peaceful. Organizers also made many nods to Yreka Police for being there for demonstrator’s safety. People attending all echoed the same thing—it’s time for change.