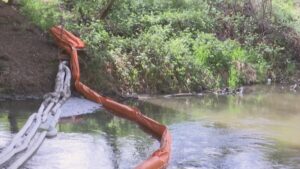 SOUTHERN OREGON, —The DEQ says it’s in the monitoring phase, weeks after a fire and fuel spill, near downtown Medford.

Right after the fire, the booms helped crews collect fuels that made their way into Bear Creek.

It still has a couple of booms located in the creek, according to DEQ

Those get checked once a week to check for fuel collection.

The DEQ says as of a few days ago, there were no more oil sheens seen on the creek, but could see more with the rain.

The DEQ hopes most of the fuel has moved through the system already, or been collected.

Since the spill, ODFW has been surveying the impacted areas of bear creek.

“As far as wildlife goes, the most impact we’ve had is oiled birds, those are mostly mallards and Canadian geese, there are a handful of those birds that were transferred to a rehabilitation center on the coast,” said Meghan Dugan with ODFW.

ODFW says fish have not been impacted from the fuel, but it isn’t sure about the effects on smaller animals, like turtles or frogs.