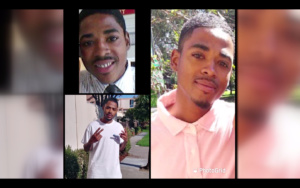 The Mt. Shasta Police Department says, 30-year-old Davohnte Morgan was last seen in the city on May 5th, 2020. It says the last footage it has of him, was a short time after 9 a-m, walking down south mt. Shasta boulevard that day. On May 7th, 2020, his girlfriend reported him missing.

Cell phone records show the last time his phone pinged, was to a location in Oakland, California on May 3rd, the day before he arrived in Mt. Shasta. A 2nd ping was done approximately a week later and confirmed the phone had still not been turned on.

His mother tells us he would not have gone missing without contacting them.

“I’m out of my mind, like he’s not just my son he’s my best friend and I miss him, like everybody misses him this has not only had an effect on me and my family but our community too,” said Terri Barnes, his mother.

Barnes says she posts flyers wherever she goes, and she isn’t giving up on finding her son.

The family has hired a private investigator and are now offering a $25,000 reward for information leading to his return.