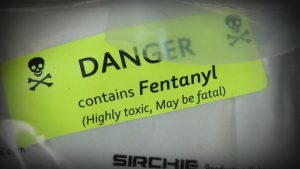 MEDFORD, Ore. – Fentanyl is increasingly becoming more of an issue within the Rogue Valley. Now police are warning residents of how it could affect them.

Last year, overdoses caused by fentanyl more than doubled from 6 to 13. Now Jackson County Sheriff’s Office said it could potentially double again. But it’s not just from illicit drugs, it’s also from counterfeit pills too.

“It doesn’t come from a professional compound facility like a pharmacy. It could really be in someone’s garage and they are mixing fentanyl and stamping them to look like a legitimate pill,” said Aaron Lewis, Jackson County Sheriff’s Office.

Jackson County Sheriff’s Office said two milligrams could kill someone depending on their size. The agency also says the only pills you should trust are the ones prescribed by your doctor.