PORTLAND, Ore — With the month of May marking the beginning of wildfire preparation, a state agency is predicting a grim outlook for central and southern Oregon.

The Northwest Interagency Coordination Center is a Portland-based fire dispatch agency. It released graphics this week – detailing the ongoing drought in much of the state, with parts of Klamath and Lake counties in extreme or exceptional drought. 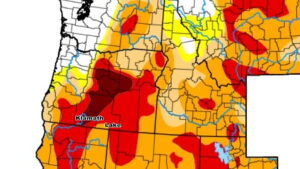 Both counties are at the center of concern, following last July’s mega Bootleg fire.

“We’re continuing to see drought [east of the cascades] at least as bad as it was in 2021,” John Saltenberger, NWICC, said . “Or maybe even worse in some areas for central Oregon, and also creeping into southwest Oregon.”

NICC expects southern Oregon to be “above normal” for significant wildland fire potential by August.  Despite the recent wet weather in the Rogue Valley, Saltenberger believes fire season will start early – by June at the latest.

The Oregon Department of Forestry declared fire season on May 12th, 2021 on its protected lands in Jackson and Josephine counties. 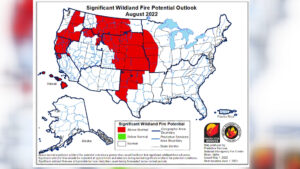 “We’re anticipating an early start to fire season, and we think it will be a long and severe one, Saltenberger said. “We think its only going to take a few days of dry and windy weather, to really boost the threat of getting some fires.”

Amid the dangerous outlook for much of the western United States, Saltenberger hopes more people pay attention, and prepare for fire season right away.

“We’re hoping to continue to draw attention to the fact that things are drier than usual, water supplies have been limited, and fire danger has elevated.” said Saltenberger.