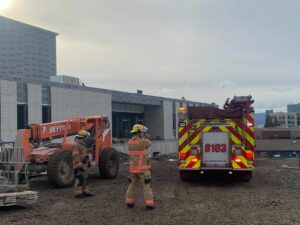 MEDFORD, Ore. —A scary moment earlier this afternoon at the construction site for Asante’s new cancer center off Barnett, when some of the roofing material caught fire.

Crews says that the small fire ignited during the construction process.

It’s unknown what caused it, but Medford Fire said it was able to put it out quickly.

MFD says there was no major structural damage to the building and this will not hurt the construction progress.