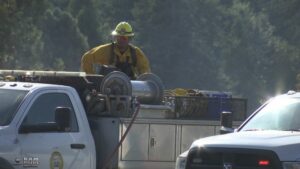 MEDFORD, Ore, —Firefighting resources are running dry regionally and across the country.

That means most of the country’s incident management teams are already committed to other incidents.

In the event of a fire, crews would have to deal with the incident themselves, before any other resources become available.

“That’s as bad as it gets and so if we have another fire or something around here we are going to have to cobble together the appropriate response and this is not good,” said Congressman Bentz.

Congressman Bentz says the ramifications of playing with fire are far too great right now and urges people across the region to be cautious.