Oregon Tech is the first public college in state history to have faculty go on strike.

Some students tell me adjunct teachers were no-shows for class today and frustration is running high.

On the first day of faculty and staff going on strike at Oregon Tech, some students showed up to empty classrooms.

“All of our class showed up, you know, all 52 of us came to this auditorium ready to learn and nobody was there,” said student, Natalie Allen.

She’s a junior studying radiologic science at the school, says the situation is worrisome.

“We’re paying so much for this education and it’s really frustrating just to get to class and have an empty podium, with no one standing there after we’ve been promised, so many emails promising us someone would be there and our education is important,” said Allen.

Allen says her tuition is between $6,000-$9,000 per term.
She worries about what she’s paying for, and how it’ll affect her grades. 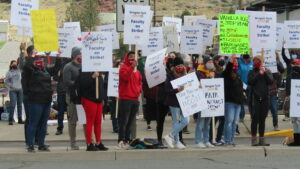 “There’s no clear answer on what it’s going to do to our grades, what’s the next step, and how long this is going to last because nobody knows… but we’ve been told we might have to take classes during the summer.”

Kari Lundgren, an associate professor in OIT’s Communication Department is also the secretary of AAUP or Oregon Tech American Association of University Professors, the faculty union.

She says she’d hoped the school would agree before 6 Monday morning, after all, they’ve been negotiating since fall of 2019.

“We don’t want to want to be on strike, we all hoped overnight that this would just be wrapped up. I mean, we’ve been doing this for over 550 days, it’s absurd,” said Lundgren.

Lundgren says the faculty on strike want clarity and transparency around fair wages and workloads.

“We’re doing a lot of things that are not instruction: committee work, curriculum development, working on departmental and institutional and national committees, doing all kinds of things that make the university function.”

“We’ve offered a 13% salary increase over the life of the contract and we offered to cover 95-97% of healthcare benefits,” said Fincher.

He says lessening staff workload for staff would mean more hiring for the school, and therefore less money available for the faculty.

Fincher says he understands the frustration of parents and students and is asking for patience.

“We are working on a solution, both sides have the students’ best interests at heart we just have a difference in how to get there,” said Fincher.

Picketing is happening at Oregon Tech’s campuses in Wilsonville and Salem, as well.

The school and faculty are set to reconvene in their negotiations again this Wednesday at 5 p.m.