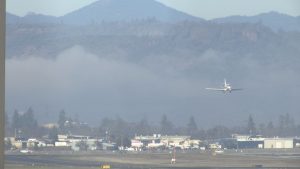 MEDFORD, Ore. — Dense fog led to problems in the sky over Thanksgiving weekend, as some flights to and from Medford’s airport were delayed or canceled.

The Rogue Valley International-Medford Airport said about ten local flights were delayed due to the conditions here and in other parts of the country, only two flights were canceled.

Director of security, Debbie Smith, said it’s a reminder to stay on top of your flights heading into the holiday season.

“I do recommend our passengers get a mobile app, stay in contact with their air carrier,” Smith said. “That way they’re getting real-time information in regards to the flights if the times have been changed at all.”

The delays only seemed to last for a couple of hours, as conditions cleared up.