0
0 Shares
MEDFORD, Ore. — A local man is working to change his life for the better after facing multiple hardships along the way.

Maurice Hernandez has been kicked down time and time again – but his faith, family, and a new job as a wildland firefighter are keeping him motivated to stay on the right path.

After purchasing a one-way bus ticket to Medford in 2017, Hernandez has been working hard to get his life on track.

“Rock bottom has a basement, and it’s deep,” he said.

He says he lived on the Bear Creek Greenway until 2019. 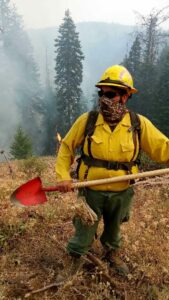 Hernandez says it was at the Medford Gospel Mission he discovered his faith.

“COVID hit, it was a battle at the church home so I moved on from there and got a job at Harry and David.”

He said his life was moving in a good direction, until last September. The Almeda Fire destroyed a home he had just moved into, taking all of his belongings.

“An officer came and pulled me out and [we] turned around across the street… we watched the structure burn. I slept in Gold Hill that night,” he said softly.

The help he received even led him to a new job as a wildland firefighter.

“Mother nature is the only thing we can really fight back and not get in trouble for, establish victory – because the fire took everything I had. So now, it’s trying to do it again to other people in the community and I can beat that up,” he told me.

Hernandez says aside from his faith, his two young daughters, 11-year-old Isabella and 9-year-old Jordyn, give him the willpower to keep going. “These ones right here, they moved out here from California to Oregon.”

He dreams of owning a home of his own with livestock in the future.

“I just want to be able to have a manufactured home, enough to put down on a trailer park or lot somewhere, a house would be awesome, but you’ve got to start somewhere.”

Hernandez is currently staying at a hotel in Medford.

He’s saving money for the future and hopes to create a life for himself in Southern Oregon.